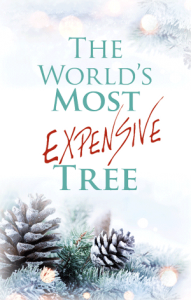 It was recognized by the Guinness Book as the world’s most expensive tree and cost over $11 million. There was nothing cheap about the Christmas Tree in the lobby of the Emirates Palace Hotel in Abu Dhabi. The bare-bones tree cost at least $10,000, but it’s what hung on the 43 ft. (13 m) high tree that gave it such incredible value.
The Christmas Tree was decorated with ornaments that were breathtaking to the human eye. Over 181 ornaments of gold and precious stones, including diamonds, pearls, emeralds and sapphires, hung from the boughs of the tree — all for a marketing ploy.
The reality is — a higher, more permanent record has listed another tree as the most expensive tree in the world. Again, what gave the tree its value was what hung on the tree. In fact, the world’s most expensive tree so far outstrips the value of the Abu Dhabi tree that it almost seems like poor taste to attempt a comparison.

The World’s Most Expensive Tree

The pearls, the glittering gold, the flashing diamonds and all the ornaments on that tree is dollar-store cheap when contrasted to the world’s most expensive tree.
The costliest tree of the ages was not mounted in the lobby of a luxury hotel to be viewed by admiring eyes. The tree was mounted on the top of a barren little hill outside of Jerusalem. It looked more like a pole or a cross than an actual tree. No matter what angle you viewed it from — there was nothing pleasing to the natural eye.
In fact, this tree had all the markings of human brutality on it. The polished veneer of good taste was nowhere to be seen. Those who passed by sneered and mocked. The world’s most expensive tree was of no value to most.

The wood from the tree is not what gave it value. It was the hanging on the tree that drove its value through the roof of earth and up to heaven itself. What was hanging on that tree was of infinite value — far above the price of diamonds, silver and gold. Tears come to the eye at the very thought of it.
A man beaten and bruised hung upon that tree. Yes, death by crucifixion was the Roman way of executing the worst of criminals — but this man was innocent. He was perfect. This man had been stripped of His clothes. His back was slashed open from a horrific beating. Men had repeatedly spewed their spit in His face and threw their punches at Him, even pounding His head with a rod as they blindfolded Him. Then the ultimate insult reserved for those who had committed the most despicable crimes: they nailed His hands and feet with spikes to a cross — a tree — and left Him to die.

His Name Was Jesus

Through all of the torture, not a threatening word came from His lips. Not a flash of anger from His eyes — nothing but love. From that tree He prayed to God and said: Father, forgive them.
You need to know something else about that tree. There God placed upon Jesus the heaviest load of all — He put Him there to die for us, to offer Himself as a sacrifice for us. He offered Himself there to take God’s holy wrath and judgment for our sins in place of us. God “made Him to be sin for us” (2 Corinthians 5:20).
The Apostle Peter wrote: “Who His own self bare our sins in His own body on the tree” (1 Peter 2:24). He also said: “[You] were … redeemed … not with corruptible things, as silver and gold … but with the precious blood of Christ” (1 Peter 1:18-19).
At the end, just before Jesus died, He triumphantly cried with a very loud voice: “It is finished!” (John 19:30). He then bowed His head, delivered up His spirit and died. What was it that Jesus finished? Jesus paid my sin debt by dying on the tree. “Paid in full” is the equivalent phrase in the Greek language. His precious blood flowed freely. You too can claim its value and say your sins are “paid in full.”
Without question, that tree is the most expensive tree of all times because of “Who” hung upon it and “what” He accomplished there for our sins.

Which Tree Means the Most to You?

Which tree is of greater value to you — the one elaborately decorated that will only make it to the Guinness World Records or the one recorded in the Bible as the tree upon which sins were paid for by precious blood that flowed from the innocent and holy One — the Lord Jesus Christ?
Everyone going to heaven appreciates, in a very personal sense, what happened on that tree. This will be the best moment of your entire life, if you, for the first time, receive the Lord Jesus Christ as your own Savior.