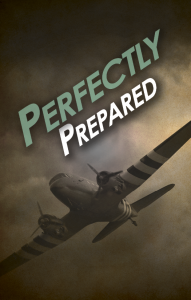 In late May 1944, the naval vessels were being loaded for the vast invasion of the Normandy coast. Winston Churchill, prime minister of England, wanted to go but King George VI forced him to sit home. Eisenhower and all the other top staff had to stay home with him.
But 101st Airborne Lt. Richard Winters took off in his C-47 transport. Ten seconds later another C-47 lifted off, ten seconds later another and another until the air was black with them. When the last one lifted off, Eisenhower’s eyes were glistening with tears. “Well, it’s on,” he said softly as he turned away and headed for his cottage.
In a manger outside of Bethlehem, the Creator of the universe reached the front line of the combat with sin. He wasn’t too valuable to risk losing, too old to go, too afraid to die. He had full authority to stay home, but love led Him to become a man and enter His creation. “Thou shalt call His name JESUS: for He shall save His people from their sins” (Matthew 1:21).
At 12:01 a.m. on June 6, D-Day, Lt. Richard Winters of the 101st Airborne was winging through the darkness toward Normandy. The whole flight over he prayed he’d live and wouldn’t fail. Before his boots hit French soil, he’d be more than 5 miles from his objective and his commanding officer would be dead. Outnumbered almost 5 to 1, Winters, with only one light mortar, two light machine guns, two submachine guns and five rifles, found his objective and attacked immediately. Some of the courage came from the fact they had no idea what they were heading into. This was their first combat experience. As one man said, “I was sure I would not be killed. I felt that if a bullet was headed for me, it would be deflected.” He would never take those chances again.


Perfect Knowledge, Perfect Work
But Jesus Christ knew exactly what He was headed into when He became a Man on the front line. Facing the Roman commander Pilate, who was about to unjustly condemn Him to death, Jesus said, “To this end was I born, and for this cause came I into the world, that I should bear witness unto the truth” (John 18:37). His wasn’t the courage of a mere man fighting for a great cause. Jesus Christ was about to carry out the unmatched masterstroke of love and sacrifice to honor God and put away sin.
At 8:30 a.m. Lt. Winters personally led a quick flanking attack, while some of his men provided suppression fire with the machine guns and mortars. In the heavy fighting, Winters’ men suffered severe casualties, including 4 men killed. By the end, the four huge 105 mm artillery pieces aimed at the American landing force lay in ruins and the surviving paratroopers withdrew. Hours later two Sherman tanks would finish the job of clearing out the position.
Just outside Jerusalem after darkness had covered the hill of Golgotha for three hours in the middle of the day, Jesus cried out from the cross, “It is finished: and He bowed His head, and gave up the ghost” (John 19:30). The full job of suffering the penalty for sin from a holy God had been completed. No one was required to come and finish the job for Him. Instead He holds out an invitation to all who will believe on Him and His work. Now He offers a just forgiveness for sin to all who will believe on Him as their only escape from the horrible penalty for rebellion against God. “For God so loved the world, that He gave His only begotten Son, that whosoever believeth in Him should not perish, but have everlasting life” (John 3:16).
At midnight on D-Day, Lt. Winters wrote in his diary that he “did not forget to get on my knees and thank God for helping me to live through this day.” Will you bow your heart in submission to God? “If thou shalt confess with thy mouth the Lord Jesus, and shalt believe in thine heart that God hath raised Him from the dead, thou shalt be saved” (Romans 10:9). You can simply thank the Lord Jesus for what He’s done for you. Or, like too many on D-Day, you can assume there’s no great personal danger and let your conscience go back to sleep. Are you perfectly prepared with God’s salvation through faith in Christ Jesus or neglecting it and heading into the blackness of eternity trusting in your own good effort?