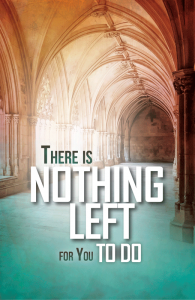 was raised in religion, but he was notorious for his pursuit of pleasure. However, like you and me, he had both a memory and a conscience.

Nicholas began to remember the many wicked things he had done and the warnings he had received. His conscience convicted him. He thought, “It may be true that there is an eternal punishment for sinners!” He had heard of the “lake of fire” and thought, “If anyone is ever likely to be there, it is myself — for I have never seen or heard of anyone who has sinned as I have done.”

His sins lost their pleasure. The horrors of hell haunted him — he longed for deliverance from his past, from his guilt — from himself! He despaired of ever discovering a way for sinners to be saved. He feared that a long life of penance and a thousand years in purgatory would not be enough to find the favor of a holy God. What could he do?

He had heard of a monastery whose rules and restrictions were the most severe of any, and he decided to go there to seek his soul’s salvation, if possible. He would become a monk and endure all of the harsh discipline demanded, if only he could be sure of pardon.

That monastery was about 1,500 miles from his home, and he walked the whole way because he thought that the long, hot journey might count as a part of his penance. Finally, faint and fearful, he reached the old building and rang the bell. An old monk slowly opened the door.

“What do you want?” asked the aged monk.

“I want to be saved,” replied Nicholas.

“Tell me what you mean,” said the old man.

Nicholas answered, “I have been a far greater sinner than anyone I ever heard of. I do not think it is possible that I can be saved. But I am willing to do whatever may be done, if only I may have a faint hope of escaping eternal punishment. If it must be by spending all of the rest of my life in penance, the harder it is, the more I shall be thankful. Only tell me what to do, and I will gladly do it.”

“If you are ready to do what I tell you,” replied the old monk, “you will go back to Germany. There was One down here who has done the whole work in your place before you came — and He has finished it. He did it instead of you, so there is nothing left for you to do! It is all done.”

“Who has done it?” asked a stunned Nicholas.

“Did you never hear of the Lord Jesus Christ?” replied the old man.

“Yes, of course I have heard of Him.”

“Do you know where He is?” enquired the old man.

“No, except that He is always in heaven.”

“Do you not know what He said on the cross? ‘It is finished.’ What was finished? The work you want to begin! And now, if you want to do something worse than all you have ever done — you may cast contempt on the blessed and perfect work of the Son of God by trying to do what only He could do and has finished. It would be as if you said, ‘Christ has not done enough. I must add to the work which He has declared is finished.’

“I stay here where Christ is insulted because I am old and can only walk to the gate. But you can go, and I urge you to go back to your friends and to tell them what the Lord has done for you.”

Said Nicholas, “I stayed three days, and the old man told me much more of the work of the Lord Jesus — not only what His death had done for me, but also how He had risen again to give me eternal life and how He had won a place for me in heaven, above the angels, where He is waiting for me and for all who believe in Him. Now I tell any who will listen the wonderful news of the perfect work of Christ.”

“Christ also hath once suffered for sins, the Just for the unjust, that He might bring us to God” (1 Peter 3:18).

“Now once in the end of the world hath He appeared to put away sin by the sacrifice of Himself” (Hebrews 9:26).

Friend, do you rest in Christ and in His work?