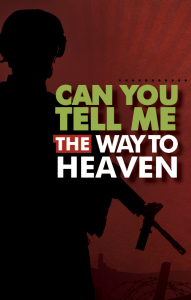 One morning we were holding the line when our company came under heavy fire. Suddenly there was a black cloud as a shell exploded and pieces of shrapnel whizzed past us. Poor Bert took a hit and fell hard. Jim and another buddy jumped down and picked him up. He was still alive, but it was clear we were going to lose him. Jim and other soldiers found empty sandbags and an old jacket and laid Bert on them in the bottom of the trench.
They had not been back on the firing line long when Jim was startled by a weak voice behind him asking, “Can you tell me the way to heaven?”
Jim jumped down again beside Bert and said, “The way to heaven? Sorry, buddy, I don’t know, but I’ll ask the other guys and find out if anyone knows.”
Jim moved along behind the firing line and asked the first soldier if he could tell Bert the way to heaven. He said, “No,” so Jim asked the next soldier, but he didn’t know either. Jim moved to the next squad and asked the first soldier … same answer. From there each soldier relayed the question to the buddy next to him. The message was passed from man to man, until sixteen had given the same answer — not one of those sixteen men could tell dying Bert the way to heaven.
When you have trained together, been shipped overseas together, faced the dangers and hardships of combat missions together, you become close buddies. And when you see a buddy dying and you can’t help him, that’s hard … really hard. In peacetime we might have given him some sort of answer, but when a buddy is dying on the battlefield, it’s different. What we think or guess just won’t do. No, when a buddy is dying, he wants only the real answer — the truth.
The question was passed down to the seventeenth man: “Bert’s dying and wants to know the way to heaven. Can you help him?”

A smile lit up the soldier’s face. “Yes, I know the way to heaven, but I can’t leave my station to go to him.” Quickly he pulled out a little New Testament and flipped through the pages until he found the page with John 3:16. “I’ll turn back the corner of the page, but you put your thumb under that verse that’s underlined. Tell him that is the way to heaven.”
The New Testament and the message were quickly passed back down the line until it reached Jim. He dropped down beside Bert and touched his shoulder. As Bert slowly opened his eyes, Jim said, “I’ve got it, Bert. Here’s the way to heaven.” And he read aloud, “For God so loved the world, that He gave His only begotten Son, that whosoever believeth in Him should not perish, but have everlasting life.”
Bert’s eyes were alert now and he was clinging to every word.  Jim, who was the biggest guy in our company, knelt at the bottom of the trench, holding the little Testament, with tears running down his face as he read over and over again those life-giving words to his dying buddy: “For God so loved the world, that He gave His only begotten Son, that whosoever believeth in Him should not perish, but have everlasting life.”
A look of peace came over Bert’s face as he weakly kept repeating the word “whosoever.” Then, after lying quiet for a minute his face lit up with relief, and with one final gasp he said “whosoever” and was gone. Gone from the battlefield to be with Christ! It was a wonderful change for Bert; he was in his Saviour’s presence!
As a soldier who has now also found the way to heaven, let me assure you that this is the real thing — the truth. Jesus is the real Saviour. He said, “I am the way, the truth, and the life” (John 14:6). He also said, “I am the door: by Me if any man enter in, he shall be saved” (John 10:9).
Jesus, whose precious blood cleanses us from all sin (1 John 1:7), died, the Just for the unjust, that He might bring us to God. Now He is seated at God’s right hand where He is crowned with glory and honor. He is the only Saviour and the only way to heaven. It is not enough to merely know the way to heaven; you must actually go that way through Christ — the door.
“Neither is there salvation in any other: for there is none other name under heaven given among men, whereby we must be saved” (Acts 4:12).
“Christ Jesus came into the world to save sinners” (1 Timothy 1:15).
“Believe on the Lord Jesus Christ, and thou shalt be saved” (Acts 16:31).