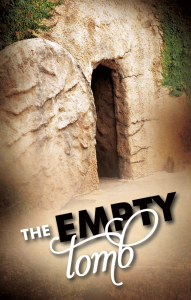 In one of the villages in northern India a Christian preacher was speaking in a market. There is naturally a good deal of discussion after such meetings, for India is a land of culture. A Muslim came up and said, “You must admit that we Muslims have one thing that you Christians have not. We at least can take our people to Medina where they can see the tomb of Mohammed, but when you Christians go to Jerusalem, you have no coffin. You have an empty tomb.”
To this the preacher replied, “Praise God, you’re right! That’s the difference between our faith and yours. Your leader is in his grave, but Jesus Christ, whose kingdom is to include all nations and kindreds and tribes, is not in any grave. He is risen! And He says from the resurrection side of an empty tomb, “All power is given unto Me in heaven and in earth” (Matthew 28:18).
Our risen Lord is our ever-living Saviour. And His promise is, “Because I live, ye shall live also” (John 14:19).


A Real Man
You ask, “Did Christ really live?” That is one thing that all agree upon — that this Person who claimed to be the Son of God really lived here on earth among men.
We know when He lived — from about 5 B.C. until about 31 A.D.
We know where He was born — in Bethlehem, of Judea, a real town, not a mythological one. We know where He lived for most of the years of His life — in Nazareth, in northern Galilee. There He worked as a carpenter.
We know many of the characters of His day — their names appear in other historical writings outside of the Bible: Herod the Great, his son Herod, Agrippa, Salome, Pontius Pilate, Tiberius Caesar, Gamaliel, Felix and Festus.
Every history of the ancient world and every encyclopedia records the fact that Jesus lived during the first century of our era. H. G. Wells, the historian, had a contempt, indeed a hatred, for almost every article of the Christian faith, but he was compelled to give pages to Jesus of Nazareth in his Outline of History.

Unique Power
Millions in each generation have had their lives gripped and changed by the firm belief that Christ has given the world the perfect revelation of God, the only gospel that delivers men from the power of sin, the only assurance of forgiveness of sins and the only certain hope of life to come.
Christ has done more to lift and empower the ethical standards of men than all the philosophers of Greece combined. Among all the great men of history, He “is above all.” “That in all things He might have the preeminence” (Colossians 1:18).
Jesus Christ lived! And now “He ever liveth to make intercession for them” who believe on Him (Hebrews 7:25).

What Am I to Believe?
A lady once wrote to a servant of Christ, “Will you put it down in black and white what I am to believe? I have been told of many different texts, and there are so many that I am bewildered. Please tell me one text, and I will try to believe it.”
The answer came: “It is not any one text, nor any number of texts that saves the soul. It is by trusting the Person and the work of the Lord Jesus that we are saved.” “Believe on the Lord Jesus Christ, and thou shalt be saved” (Acts 16:31).