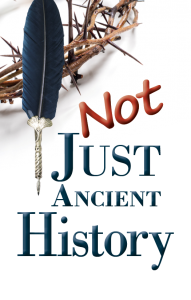 The historical evidence for Jesus is long-established. Within decades of His life, He is mentioned by Jewish and Roman historians, as well as by many Christian writings. Compare that with, for example, King Arthur, who “maybe” lived around 500 A.D. The sources for events of that time do not even mention Arthur. He is first referred to only 300 or 400 years later. The evidence for Jesus is not “folklore.”
The Christian writings are evidence that is early and detailed. There are early writings by the Apostle Paul, and scholars agree that these were written within about 25 years of Jesus’ death. The detailed biographical accounts of Jesus in the Gospels date from around 40 years after He died. These all appeared within the lifetimes of numerous eyewitnesses and provide descriptions that agree with the culture and geography of first-century Palestine.


Non-Christian Authors
The first non-Christian author to mention Jesus is the Jewish historian Josephus, who wrote a history of Judaism around 93 A.D. He has two references to Jesus. One of these is controversial because it is thought to be edited by Christian scribes, but the other is not suspicious — a reference to James, the brother of “Jesus, the so-called Christ.”
About 20 years later we have the significant Roman high officials, Pliny and Tacitus, who ruled at the beginning of the second century A.D. Their reports fit with the time frame of the Gospels and we learn that Jesus was executed while Pontius Pilate was the governor and that the Christians worshipped Christ as “a god.”

Not Just Ancient History
These abundant and significant historical references by various writers leave us with little reasonable doubt that Jesus lived and died. But another important consideration is that Jesus died and LIVES.
The Bible says that because He lives, “He is able also to save them to the uttermost [completely] that come unto God by Him” (Hebrews 7:25). He knows your situation, your sins and your attempts to break free. He’s not shocked, surprised or repulsed by anything about you. “All things are naked and opened unto the eyes of Him with whom we have to do” (Hebrews 4:13). But just like a doctor that scans a patient to expose a cancerous tumor, God exposes our sin so that we will run to Him for treatment to have it removed. “The blood of Jesus Christ His Son cleanseth us from all sin” (1 John 1:7).
Only God is able to save you, to change your life. And He does this from the inside out. He can cleanse your heart, bring forgiveness to your soul, and put a song in your mouth. He promises to be with us forever. He says, “I will never leave thee, nor forsake thee” (Hebrews 13:5). Those aren’t the words of a long-dead historical figure, a mere inspiring example or a religious dogma. They speak to you at this moment about a living person, Jesus Christ, who wants you to come to Him today to begin a living relationship.

Not Just Optional
But meeting Jesus Christ face to face isn’t just an optional appointment, a mere bonus upgrade to life on earth. Everyone will meet Him. Some do it in this life and begin a personal relationship with Him as their Savior and friend. But here’s another important part of His message: God “commandeth all men everywhere to repent: because He hath appointed a day, in the which He will judge the world in righteousness by that man whom He hath ordained; whereof He hath given assurance unto all men, in that He hath raised Him from the dead” (Acts 17:30‑31).