Skip to content
The rubble, dust and dirt were 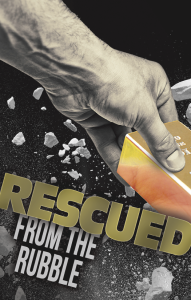 products of the renovation project in the bathroom. But staring out from underneath it all was a small glistening object. Turns out the plumber in Calgary, Alberta, had uncovered a heavy $50,000 gold bar the size of a cell phone. It had the jeweler’s stamp on it as well as its serial number. The owners were thrilled, of course.
The news brought to mind Jesus’ story about the woman who lost a coin and who swept and searched the house until she found it. It says she also rejoiced. See Luke 15.
Through neglect or carelessness, your life may be like the lost gold bar. Maybe life is mostly an environment of dusty rubble, mislaid plans, broken promises and disappointing results. Maybe, as in the case in Calgary, there is a personal renovation job going on, an attempt to reform and restart, to turn a new page. But you’re finding it difficult to get out of the rubble.

Your Creator’s Workmanship
Remember this: In our ruin we still show the stamp of our Creator’s work — and retain our value to Him. And you have your own serial number in your personal DNA. In your darkness and loneliness, you still have the same value that God put upon you. That has never changed, and that’s why God never stops looking for you.
In fact, it is God who has initiated the search in the debris of our sinful world. It is God who sent Jesus here to sweep, to search, to turn the light on, and to pursue the lost sinner. He came here and lived among sinners, among the filth and debris, yet He was without sin. In rich grace, He went as far as the death of the cross where God’s wrath fell on Him, because of my sin.

An Unimaginably Good God
How could humans ever invent a God like this, a God who seeks and saves unworthy sinners, because they have an undiminished value in His heart of love? Where else is there a God like this who seeks out His enemies and makes them His friends?
It is God’s hand that can pick you up and restore you to the usefulness He intended for you when He made you. You are the object of His search. In the story Jesus told, the woman searched until she found her precious coin. God is not quitting either.
There is a verse in John 3 in the Bible that sums up these thoughts, that speaks of the worth you have to Him and the cost of His search. It says that God loved this evil world so much that He gave us Jesus, and everyone who believes in Him will not stay lost forever, but will have eternal life, right now.
The exact words are: “For God so loved the world, that He gave His only begotten Son, that whosoever believeth in Him should not perish, but have everlasting life” (John 3:16).
Will you believe in Him? Will you simply trust Him to sweep away the rubble of sin and restore you to what He intended you to be? You can receive Him as Savior today.