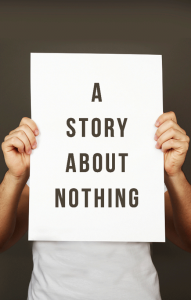 nothing — nothing at all. That’s what you brought into the world with you when you were born. Just nothing … zero.

There was a man in Italy who added a great deal of money to his first zero, and he became a rich man with a lot of zeros after the number one. He had an expensive car and much more. He also had in his car one little New Testament which he had stuffed out of sight in his glove compartment, because he didn’t know what to do with it.

Think of that! The eternal Word of God, showing the way to everlasting joy with the answer to all the sins and sorrows of life and death … and he didn’t know what to do with it! He knew how to handle money and how to make more. He knew how to get a beautiful house and how to meet im­portant people, but he didn’t know God’s simple way of salvation. How poor can a rich man be?

Then came the car accident. The ambulance was called, and there was nothing he could do but wait. His injuries were not severe, but he knew very well that he could have been killed. His hand reached for the ownership papers of his car, and his fingers came up with that little New Testament. For the first time, he opened it and read that verse about “nothing.” It was 1 Timothy 6:7. “We brought nothing into this world, and it is certain we can carry nothing out.”

“I felt as if I had been struck by lightning!” he said later. He realized that if he had been killed, all his possessions would be reduced to the original zero. Nothing would be left for eternity. Not a single penny of all his riches would still be his the moment after his death.

But after death there is something that would still be his. His sins! These you cannot get rid of after death. They must be gotten rid of before death or they are yours forever, through the endless ages of eternity. Will you please, at this mo­ment, picture this awful truth — stand­ing before God in your sins!

However, the awful debt of my sins has been paid by the One who loves me and died for me on Calvary. His pre­cious blood cleanses from all sin now, and this cleansing is forever. After I’m gone, everything I own will also be left behind for someone else. But, Jesus is mine forever. I cannot lose Him because He cannot lose me. When God looks at me, He sees Jesus, now and forever.

The rich man in the car accident be­gan to read the Bible earnestly, and he soon accepted the Lord Jesus as his Sav­iour and was then baptized. Will you also receive this loving Saviour as your own? “Behold, now is the accepted time; behold, now is the day of salva­tion” (2 Corinthians 6:2).