Skip to content
Can you see the black dots? 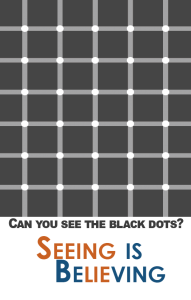 The black dots you see don’t really exist. Whenever you look at one directly, it disappears.
We live in a visual age. Seeing is believing! We only believe in what we can see and touch. To believe in anything else is thought to be misguided faith and fantasy — those who are weak-minded have to depend on “God” as a crutch. However, it’s interesting that as soon as life throws its worst at us, we blame and curse the God that we don’t believe in and become bitter towards Him.
Deep within all of us there is an innate awareness of the God who made us. Some people suppress this inbuilt consciousness. We question, Why should God hide Himself from humanity? Although this might seem a reasonable way of thinking, we have presumed that God should think and act the way we want Him to.
God speaking through a man called David in 1000 B.C. said, “Thou thoughtest that I was altogether such an one as thyself” (Psalm 50:21).We try to bring the God of the cosmos down to our level, thus minimizing His awesome splendor and greatness. The Bible says that God dwells “in the light which no man can approach unto; whom no man hath seen, nor can see” (1 Timothy 6:16). Let me introduce you to the Man who has changed my life. He lived 2000 years ago. He is the historical figure who split history in two, the Man whose name is either praised or cursed all over the world.
His name is Jesus, which means Savior. He performed many spectacular miracles in His day, healing the sick and even raising the dead! Many people saw these miracles and yet still refused to believe. One close follower of Jesus wanted to put all doubts to rest and asked him, “Show us the Father” (John 14:8). Jesus replied, “He that hath seen Me hath seen the Father” (John 14:9). Now that’s a big claim worth looking into!
Many people saw and believed that this man was the promised Messiah who was to come and save them from their Roman oppressors, but it’s clear upon reading the eyewitness accounts that He was on a very specific rescue mission: He came to save you and me. Jesus Himself said these words: “If ye believe not that I am he, ye shall die in your sins” (John 8:24). We don’t like to think of ourselves as sinners. It makes us feel uncomfortable, but Jesus here gives us a warning. The Bible says that “all things are naked and opened unto the eyes of Him with whom we have to do” (Hebrews 4:13). Whether we agree with God or not, we stand guilty before Him, for it is when we appreciate the ultimate goodness of God and the offensive nature of our sins that we acknowledge our dilemma. The good news is that we don’t need to fear hell because Jesus didn’t come to condemn us, but to save us.
Jesus was eventually crucified because He said that He was God and the Jews believed this to be blasphemy. At least, this is the human perspective of the historical events. Here’s God’s perspective in a nutshell:
“For God so loved the world, that He gave His only begotten Son, that whosoever believeth in Him should not perish, but have everlasting life” (John 3:16).
God has given you a gift — His perfect Son, Jesus. He died in your place so that you might be forgiven of all your wrong and receive life forever.

WHAT WILL YOU DO WITH JESUS?
The incredible news is that the tomb of Jesus was found empty three days later. Jesus conquered death and offers us the free gift of eternal life.
Will you agree with God about your sins and put your faith in the God-Man Jesus, who died in your place, taking the punishment that those sins deserved?
“Whosoever shall call upon the name of the Lord shall be saved” (Romans 10:13).
Some would call my Jesus a crutch, and yet we all choose to lean on something. The question is this: Is your crutch strong enough to hold you when your time is up?
Jesus said Himself, “Blessed are they that have not seen, and yet have believed” (John 20:29). SEEING IS NOT BELIEVING; rather, BELIEVING IS SEEING. We are faced with a choice, to believe or not. Eternity is too long to be wrong about Jesus.