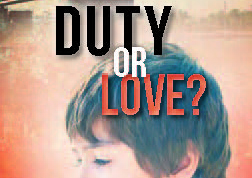 It was Friday afternoon, and Albert Drecker was on duty at the train bridge over the Passaic River. He had opened the bridge to allow a boat to pass through, and now he was about to close it in time for the New York train to race across the bridge.
Just then Albert’s little boy Peter came running along the embankment towards him. But Peter suddenly lost his footing, slipped and plunged down the steep riverbank into the deep water below. Almost at the same instant Albert Drecker heard the whistle of the approaching train in the distance. Even though he couldn’t see the train yet, Drecker knew that unless the bridge were closed immediately, the train would hurtle over the edge and into the river. Saving Peter’s life would be easy, but if he stopped to rescue him, how many others would die in a massive train wreck? What was he to do?
Decision
In agony as he watched his son drowning before his eyes, Drecker stayed at his post. Painfully slowly the great bridge swung closed, and seconds later the train roared safely across. Instantly Drecker dived into the water and dragged Peter to shore. Heartbroken, he found it was too late — his boy was dead.
Can’t we understand the feelings of Albert Drecker? It was a terrible decision he had to make. He longed to save his son, but he could not save him and the train passengers too. While he worked frantically, he watched the desperate struggles of his drowning son. The train crossed safely. His son lost his life. How deeply thankful those passengers were when they learned how Drecker had spared their lives instead of his son’s.
Perfect Love
Now think about another story which tells about perfect love and perfect obedience. Look by faith at Christ on His cross, and see there how God gave up His own dear Son to that awful death to spare guilty sinners and offer salvation free to all. There was no other way that sinners could be saved.
Should those who deserve punishment for their sins be sent to an everlasting hell, or should God send His own Son into this world to bear this judgment for them? This is the great question. Thank God, for His love was so great “that He gave His only begotten Son, that whosoever believeth in Him should not perish, but have everlasting life” (John 3:16).
Albert Drecker did not send his son into the river — he fell in. But God the Father sent His Son to be our Saviour. “In this was manifested the love of God toward us, because that God sent His only begotten Son into the world, that we might live through Him” (1 John 4:9).
Do you respond with deep gratitude to God for His wonderful love to you? Have you ever thanked Him for it and for the finished work of Christ on the cross? If you have never done this, why not thank Him today and receive the Lord Jesus as your own Saviour? To accept Him brings eternal salvation now; to reject Him will bring eternal judgment.
“He that believeth on the Son hath everlasting life: and he that believeth not the Son shall not see life; but the wrath of God abid­eth on him” (John 3:36).