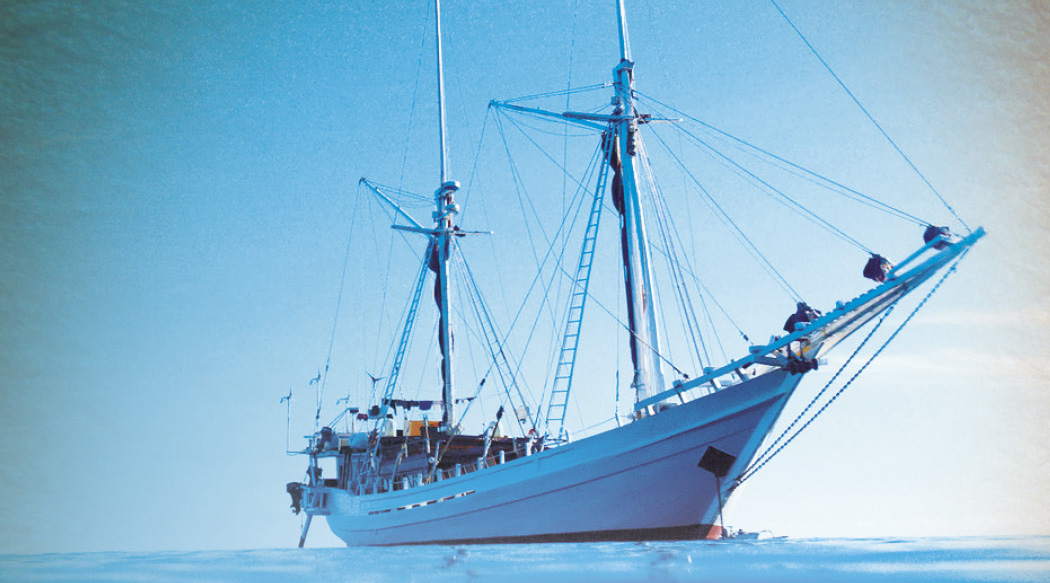 I was captain of a smuggling boat. At dawn, we discovered a coast guard boat in the distance. The coast guard was still a long way off, and we soon saw her turning toward us. We couldn’t possibly get away.
We all knew what would happen if we were caught. Not only would the boat and cargo be confiscated, but we would all be sent to prison. There was dead silence while we stared at each other in dismay. The coast guard was coming up fast behind us. Suddenly I thought of a way out. Hastily we rigged a screen at the stern to hide our deck. Then I set the men in a line to hand up the cargo and pitch it overboard.

Panic!
We worked fast; nothing was heard but the splash of the cargo dropping into the sea. The hold was emptying fast. We’d soon be finished. I saw the ship’s boy was exhausted, so I sent him to see if the coast guard was very far off. In a minute he came rushing back gasping, “It won’t sink!”
I ran to the stern of the ship. The sun was just rising behind us, and there, in that long line of light, were the packages of cargo bobbing up and down in our wake. The first package in the line had just reached the oncoming coast guard boat. Helplessly, we stood and stared. The proof of our guilt was spread out for all to see. In our ears rang “It won’t sink.”
In prison, from time to time, I would resolve to correct my ways. But resolving is one thing; doing is another. As soon as we were free, I went back to smuggling.

More Cargo Overboard
A few years later, I went out in a boat at night. It was New Year’s Eve, and in spite of myself, I began to review my life. I saw myself, as a child, saying my prayers. I heard my mother tell me of One who came down from heaven to bring life to the world. The more I thought, the more horrified I was. God had created me, and I had lived and was still living as though there was neither God nor eternity.
I got on my knees and prayed that God would help me. I would be another man. I wouldn’t touch a drop of liquor. I made many more resolutions about what I would do and what I wouldn’t, and I began to feel very good about myself. On further reflection I saw that there were a lot more things I ought to clean up. I must throw overboard everything that didn’t belong. My life was to be completely changed. My resolutions were getting more serious, my heart grew lighter, and I was happy in the thought that I had become a new man.
Having made this decision, it seemed as if everything was in perfect order. I was ready to go back to land, when suddenly the moon broke through the clouds and shone across the water to my boat. The memory of that morning when, chased by the coast guard, I had cast the cargo into the sea, came over me with overwhelming power. I heard the cry, “It won’t sink!”
How blind I was! I had tried to lighten the ship by casting the cargo overboard, and there it was all floating behind me like an accusing line stretching up to the throne of God. All that I had done, said or thought was there before God, and “it wouldn’t sink!” Fool that I was, I thought I could drown all my wickedness, without a thought of the holiness of God. If I had been able from that moment on to do only what was good, it would not have changed the evil done in the past. What good was it to be forming good resolutions for the future, when the past couldn’t be hidden? Tears filled my eyes. I was hopelessly lost.

Salvation
Then I remembered something. Hadn’t I been told about Jesus, the Saviour of sinners? Hadn’t He died on the cross for me? And if I turned to Him now, wouldn’t His precious blood wash away my many sins? Wasn’t there grace and mercy even for me?
All at once everything was clear. Yes, the Lord Jesus had died for me. He had borne the punishment of all my sins. If I accepted that, they would all be cast into the depths of the sea (Micah 7:19). “Their sins and iniquities will I remember no more” (Hebrews 10:17) came to my mind. I was filled with joy! Entirely relieved of my burden, I turned my boat toward shore — a new man. I had gone out a lost sinner, but I was coming back redeemed by the Lord.
Be assured of this: “God requireth that which is past” (Ecclesiastes 3:15). “He that covereth his sins shall not prosper: but whoso confesseth and forsak­eth them shall have mercy” (Proverbs 28:13). “The blood of Jesus Christ His Son cleanseth us from all sin” (1 John 1:7).