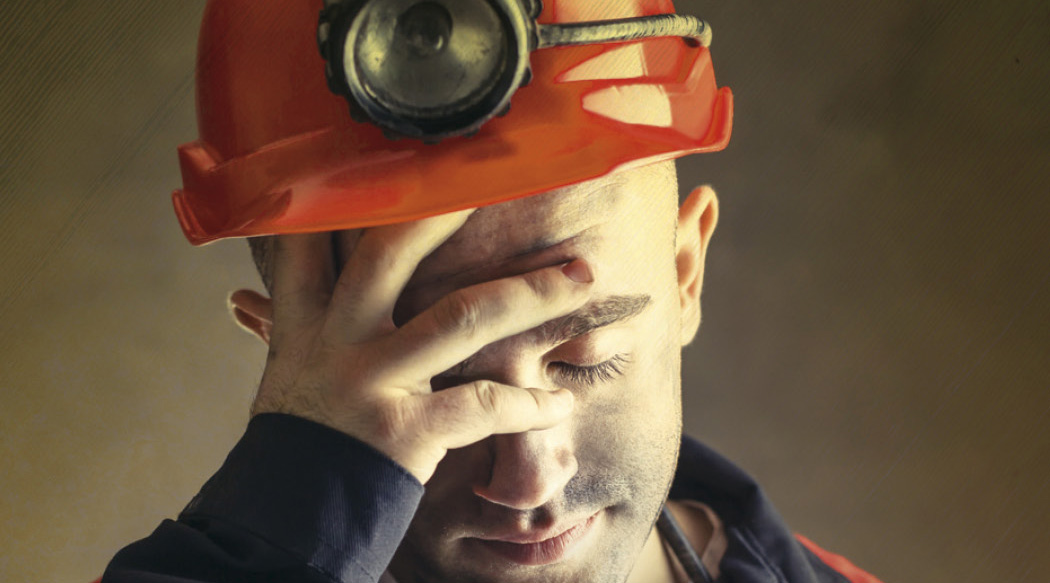 Sunday afternoon I was distributing tracts when I met two young miners coming slowly toward me. I held out a booklet to each. Each took it and thanked me. One, a strong, healthy, handsome young man, read the title aloud: Just in Time.
A deep feeling of solem­nity filled me, and looking straight into his frank, open face, I said, “Yes, my friend, and God grant you may be just in time for heaven.”
Going home I prayed, “Lord, save him.”
That Tuesday night, I had gone to bed when a loud knocking at the door made me call out, “Who’s there?”
“Sir, are you the gentleman who gave a young man a booklet on Sunday afternoon called Just in Time?”
“Yes, I am.”
“Please, come at once,” he said.
I dressed quickly and hurried out into the sum­mer night. On our way he told me that his mate had gone down the shaft that afternoon as usual, and having jumped out of the bucket before it reached the bottom, he was caught and horribly crushed. He was lying there, his friend said, in terrible agony, unable to speak, and just gasping for breath, while his life was ebbing away.

The Last Message
By the time the young man had finished his story, we reached the house. The strong man whom I had seen only two days before in the full vigor of youth now lay abso­lutely helpless. He stared straight at me as I en­tered and tried to speak.
I read to him: “God so loved the world, that He gave His only begotten Son, that whoso­ever believeth in Him should not perish, but have everlasting life” (John 3:16). I told him of the love of God in desiring his salvation and of the power of the blood of Christ to save him. I told him he was lost and ruined by nature, but that Jesus came to seek and to save the lost — that Jesus had been seeking him and wanted him — that having done the work by which sin could be put away out of God’s sight, He could now give the knowledge of the forgiveness of all his sins through His precious blood.
I read to him the story of the father and the prodigal (Luke 15) and also the brief prayers of the Pharisee and the publican in chapter 18, repeating this verse: “Him that cometh to Me I will in no wise cast out” (John 6:37).

Final Moments
His face changed; hope lighted it up. He signaled for a drink; his wife held the glass of water to his lips. He drank a lit­tle and then, to the amazement of all, spoke in a clear voice, with his eyes looking up as though he saw the One to whom he was speaking: “Just in time! God be merciful to me a sinner, for Jesus Christ’s sake. Amen!”
He had barely uttered the last word when his head fell back on the pillow; a little shivering sigh escaped him, and he was gone.
“He that heareth My word, and believeth on Him that sent Me, hath everlasting life, and shall not come into condemnation; but is passed from death unto life” (John 5:24).

Possibly Your Last Warning
I will never forget that scene. It was a warning word from the brink of eternity, and God used it for blessing. May it be a warning and a blessing to you, if you are still unsaved.
“There is but a step between me and death” (1 Samuel 20:3).
“The Lord is … not willing that any should perish” (2 Peter 3:9).
“Behold, now is the accepted time” (2 Corinthians 6:2). “Today if ye will hear His voice, harden not your hearts” (Hebrews 3:15).
“Boast not thyself of tomorrow; for thou knowest not what a day may bring forth” (Proverbs 27:1).